*Update to this post*
I just found out that this image of mine has been chosen by Darwin Wiggett as a winner this week in the How To Photograph The Canadian Rockies photo contest. I’m both flattered and humbled (and a little surprised) to have Darwin select an image of mine. He’s been a huge source of inspiration to me, and is someone I’ve learned a great deal from. If you don’t know who he is, go check out his images and his blog. If you aren’t inspired or moved in some way, you’d better check your pulse and make sure your heart’s still pumping.
Be sure to head over to the How To Photograph The Canadian Rockies blog to see the other weekly winners, and stay tuned for the grand prize winner to be announced next week.

Here’s a shot that I just got around to working on from my last trip out to the Rockies. I was initially drawn to this isolated row of reeds and their reflections in the still water. The reflections of the clouds in the sky above add some interest to what would be a pretty boring reflection otherwise. I’ll admit, this one is leaning a little more on the abstract and artsy-fartsy side of things for me, but I actually kinda like it. 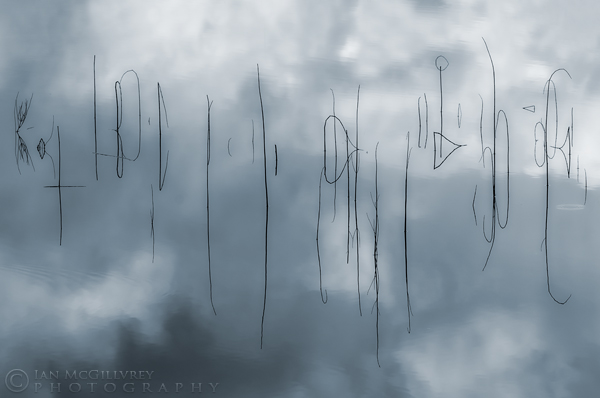 I went a little further in processing on this one than I sometimes do, with a little cropping and some cloning to clean up some a few stray reeds along the top edge. This was one of those times where I saw the image I was after, but could not physically get the camera into a position to isolate exactly what I wanted in the scene. Now, maybe if I’d gotten right down into the water and I had about a 15 foot tripod and a big ladder, I might have been able to do it, but come on, seriously… Photoshop was the obvious tool of choice here. I decided to take out the colour and go to black and white, and then add a cool-ish blue fill layer to tone the whole thing. Thanks for looking, I hope you like it!