This week’s photo was shot on a trip out to Spray Lakes early one morning this weekend with my buddy Wayne Simpson. It’s been kind of a long dry spell for each of us as far as sunrises go, so it was nice to see some colour in the sky that morning. This one was one of my favourites from the morning, I hope you enjoy it as well. Be sure to check out the image Wayne posted from the morning over on his blog as well. 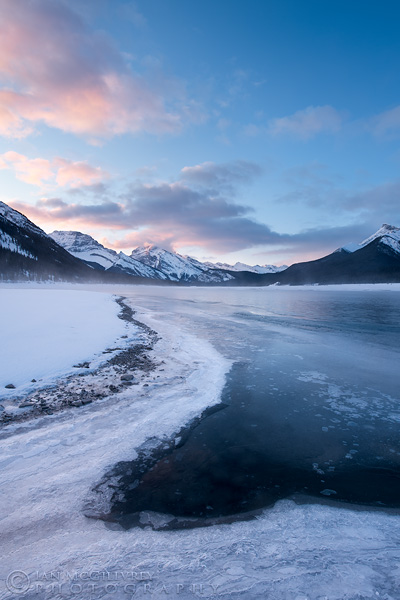 Now, if you just went to Wayne’s blog and read his post (if you haven’t, go now. I’ll wait), you’re no doubt wondering about the rough morning I had that he’s talking about. I would have been happy to leave out these details of the day, but Wayne has been so kind as to point them out… he’s so thoughtful that way.
While we were looking around an area deciding where to shoot, I was walking along the path beside Wayne when I slipped on some well disguised ice and fell to the ground and in the process of trying to catch myself managed to pull off a complete shoulder roll and ended up flat on my back. Wayne simply look down at me and asked, “What are you doing?”. Miraculously though, I wasn’t hurt at all and more importantly, the coffee I was carrying had not spilled a drop! Further down the path, as we’d only just finished laughing off my tumbling routine and started checking out another area, I put my foot through the snow and straight down into the icy cold water of the pond. This was of course followed by more laughter… and then a change of socks.
Up next and on a more serious note, I discovered that my 14-24 lens had been damaged in a small tumble it took out of my camera bag earlier in the morning. We weren’t laughing at this one though… I had initially checked out the lens after the fall and thought things were ok, but once I mounted it on the camera I realized that the zoom ring wouldn’t turn and that it had somehow become jammed in place. So it’s going in for repair this week and I’ve got my fingers crossed that it won’t be anything too major and that I won’t be without it for very long.

So it was an interesting day out to say the least… One I won’t soon forget.