This week’s photo was taken on the same outing as last week’s image from Herbert Lake. After shooting the sunrise, I made my way back along the Bow Valley Parkway as I usually do between Lake Louise and Banff. I much prefer the slower speed limit and relaxed drive along that stretch of road to the the busy Trans Canada highway. I had to laugh at one point in the morning when, as I was cooking up some breakfast, a family of tourists stopped and asked me, “… is there anything to see along this road?”. I almost didn’t know what to say, it just seemed like such a silly question! After a quick chuckle (in an “are you seriously asking me that?” kind of way) I politely told them that it was an absolutely gorgeous drive, to take their time and just enjoy the views. I noticed one passenger had a camera at the ready and also mentioned that there was a good chance they might see some wildlife and might be able to get some great shots to take home with them. I really hope they weren’t disappointed with the drive that followed my advice. For me it just doesn’t get much better than driving along that quiet road enjoying the views in the early morning light.
As the sun began to make it’s way over the mountains on the east side of the valley, the backlit trees and their long shadows were really catching my eye. I stopped at a couple different spots to try and capture what I was seeing in a photo and I think I came close to getting what I was after in this shot. I wanted to see the shadow lines of the trees coming right towards me, radiating out from the centre, with a nice sunstar breaking through the tree cover. The challenge I found, was finding a foreground element to add some interest to the front of the image and play well with the lines of the tree shadows.
Thanks for looking, I hope like this one! 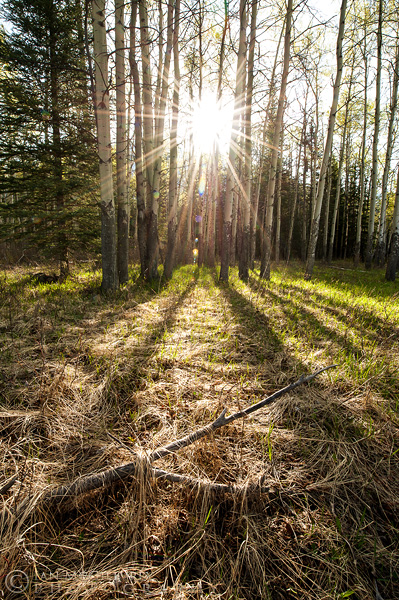