This week’s photo is another image made on the trip to southern Alberta with Peter Carroll, Darwin Wiggett, and Samantha Chrysanthou about a week and a half ago. As I mentioned in my last post we had quite a variety of weather conditions in the few days we were there which is just part of what makes this time of year such and exciting time to be out shooting here in Alberta. Even over the course of just one day that Peter and I spent out shooting together, we saw 3 distinct seasons in the span of about 12 hours (more on that in an upcoming post).

On Friday morning, the 4 of us spent the first part of the morning shooting along the shore of Elkwater Lake which was just a short walk from our campground. Thankfully, the rain and snow from days before had let up and we had some really nice conditions to work with on this that would be my final shoot of the trip. I made several images that morning, starting with some wide scenes of the sunrise over the lake and slowly working my way down to more intimate details. While I started off relatively pleased with what I was capturing, as the morning went on, I was feeling less and less satisfied with my efforts and found myself struggling to come up with anything very interesting. Many times I put the camera to my eye and simply didn’t see any reason to take the shot. It felt as though I was trying to force it and I found myself just getting frustrated. At one point I realized the rest of the gang had moved on well away from where I was and decided since I wasn’t making a whole lot of progress anyway, just to take a walk and catch up. I’d only just taken a few steps down the boardwalk along the shore of the lake when I noticed the heavy frost on the surface of the decking and all of these tiny yellow leaves laying around. Aha, finally something had caught my eye! That brief little break in my train of thought and struggle to force some kind of creativity out of me was all I needed to get back into the creative groove. I quickly gave up on finding the group and opted to pull out the macro lens and stare at the ground for a while. I got to work framing up different compositions with the frosted leaves on the wooden boards and when I got to this little scene, I made the image… then stopped. This was my final image of the shoot and I knew that I had found what I’d been looking for that morning. 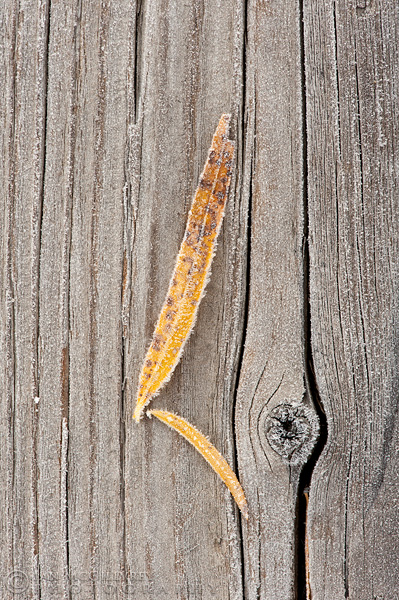 From there it was off to the local coffee shop where we met up for some much needed hot coffee and a great time of laughs and hanging out. Thanks to Sam, Darwin, and Pete for a great trip even if our time together did only overlap for a couple days.

Also, be sure to check out the latest post on oopoomoo to see some of what Sam and Darwin were up to in the next couple days of the trip.