Conditions around Calgary have been interesting for the last week or so with an unusually long string of foggy, overcast days with heavy frost clinging to everything. Normally when we see conditions like this around here, they’ll only last for a few hours, not several days. The fog usually doesn’t stick around for long and the frost is either quick to melt or be blown off by the wind. I was struggling all week with a very busy schedule to try and get out with the camera to take advantage of these wonderfully photogenic conditions. Thankfully, at the end of the week when I was finally able to squeeze in a couple hours of shooting time, the fog and frost were still hanging around. I took a quick drive up on the back roads north west of the city Friday morning and came back with a couple nice images. Unfortunately, my time was quite short and I was rushed with the commitments of the rest of the day’s schedule. I find it to be quite a creative challenge in those type of situations, especially when I haven’t been shooting at all for the last several days and don’t have my head and eyes fully engaged. Maybe for those people who do this more often, and much better than I do, this isn’t quite such a struggle, but for me it’s still pretty tough to be very creative in a rush. Despite the challenge though, I was relatively pleased with some of the results of my efforts (emphasis there on some of the results… the rest were pretty embarrassingly bad!) from the morning.

This week’s photo is one of the last images I made as I was working my way back towards town. I was first drawn to this single tree, nearly all alone in the field and started by making a few shots where I excluded any other trees from the background. Then I noticed the second tree off in the distance and really liked the way the shape and proportions of the second tree kind of echoed those of the first tree. Using the rule of thirds as a rough guide, I framed up a composition that included both of them. As with my image from last week’s post, this image is very minimal and makes use of a great deal of space and simplicity. For some reason I’ve really been drawn to these type of images lately. Maybe it’s just a mental escape from how busy the rest of my life has been lately! 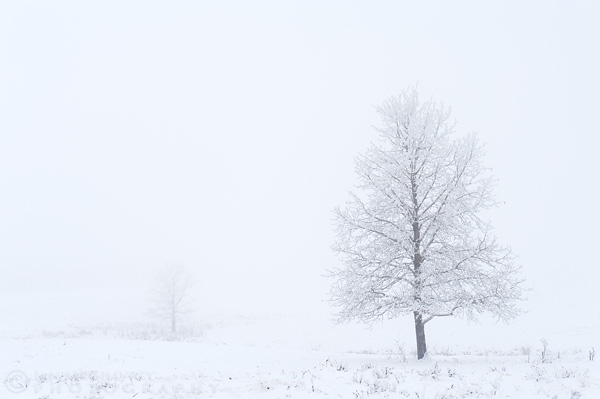