This week’s photo was taken on the same outing as my image from last week from the banks of the Mistaya River below Mt. Chephren. After spending the first part of the morning working on wide angle shots, and realizing the best light had come and gone (or maybe just hadn’t come at all), I switched lenses and started focusing in on some details. While not great for wide and dramatic scenic shots, the soft overcast light that morning was ideal for detail shots. There were some great ice formations along the edges of the water and I spent quite some time wandering up and down the river bank making images. Flowing water is one of my favourite subjects to photograph and I just can’t seem to get enough of these kind of shots. I love making them and I’m continually trying to improve on what I’ve done before. 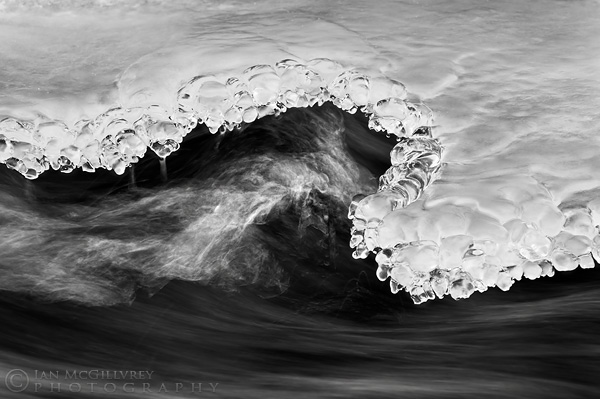 For this image, I was at 1/10th of a second which gave me some nice motion in the water but still retained a fair amount of detail. I was also using a polarizing filter to remove the reflections and darken the water. Knowing that I would be converting to black and white later, this helped to increase the contrast between the water and the ice.
I’m pretty happy with how this one turned out and I hope you enjoy it too. I still have a couple more images to share from this trip so stay tuned for those later this week.