This week’s photo comes to you from the same morning’s shoot as last week’s photo. After shooting the sunrise at Spray Lakes, we made our way back towards Calgary through Kananaskis Country along highway 40. It’s amazing the difference between one valley and another this time of year. Within just a short drive it went from cold, snowy conditions on the icy lakeshore to sunny blue skies and green leaves on the trees. It’s hard to believe these images were made on the same morning within only a couple hours of each other.

The aspen trees are just starting to grow their leaves now and they have a brilliant lime green colour to them. With the sun behind them providing strong backlight, they almost seemed to glow against the blue sky. I wanted to make use of this in an image so I stopped at a well treed spot near Barrier Lake to see what I could come up with. The curve in the horizon line here is a little misleading and might make you think this was taken with a fish-eye lens. I was actually only at 18mm for this one, and the curve is just the shape of the mountain in the background. By placing it where I did in the frame, I was able to achieve a similarly distorted effect to a fish-eye which I thought was kind of interesting. I was excited to be able to include a sunstar as well because I hadn’t yet had a chance to see how one would look with the 14-24mm lens since getting it this winter. This lens just never ceases to impress me! 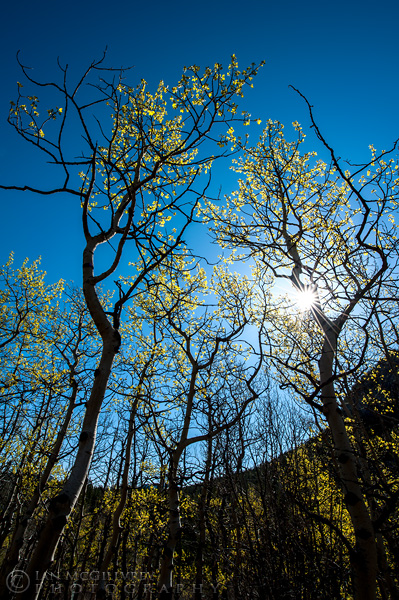 Here is a second image I made along the same lines but with a more centred composition. I’m not really sure which one I like better… what do you think? 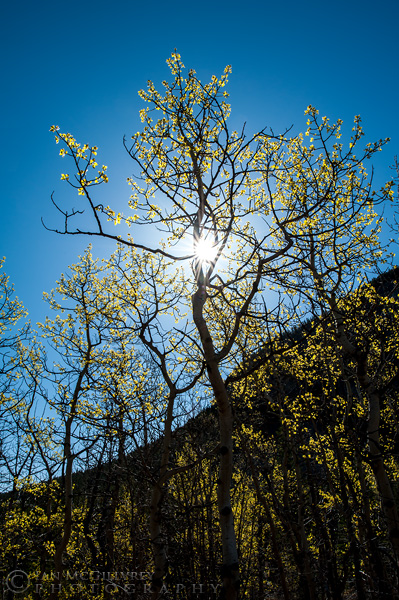