This week’s photo was taken early one morning this past week up at Spray Lakes in Kananskis Country. With the sun rising right around 6:00am these days, it’s starting to feel pretty early to get out there and into position for first light. On this trip, I headed out the night before and scouted things out then spent the night nearby to avoid the 3:00am wake up call I would have needed to get there in time from Calgary. Even with that though, the 4:45 alarm felt early enough!
This image was made about 20 minutes before sunrise at a nice spot on the shore of the lake. Having just got my 14-24mm lens back from repair, it felt great to get down close to the ice and make use of the foreground details. The clear sky was a little lacking in terms of interest but the pre dawn glow was still nice and provided soft and even light. I opted to crop this one down to the 4×5 proportion just to eliminate the boring sky in the upper portion of the image.
Hope you like it! 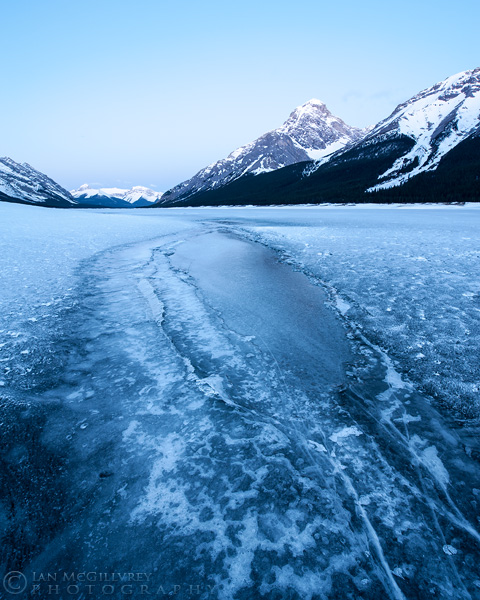